Session Musicians #1: Crikey, that Hassan can pick a band 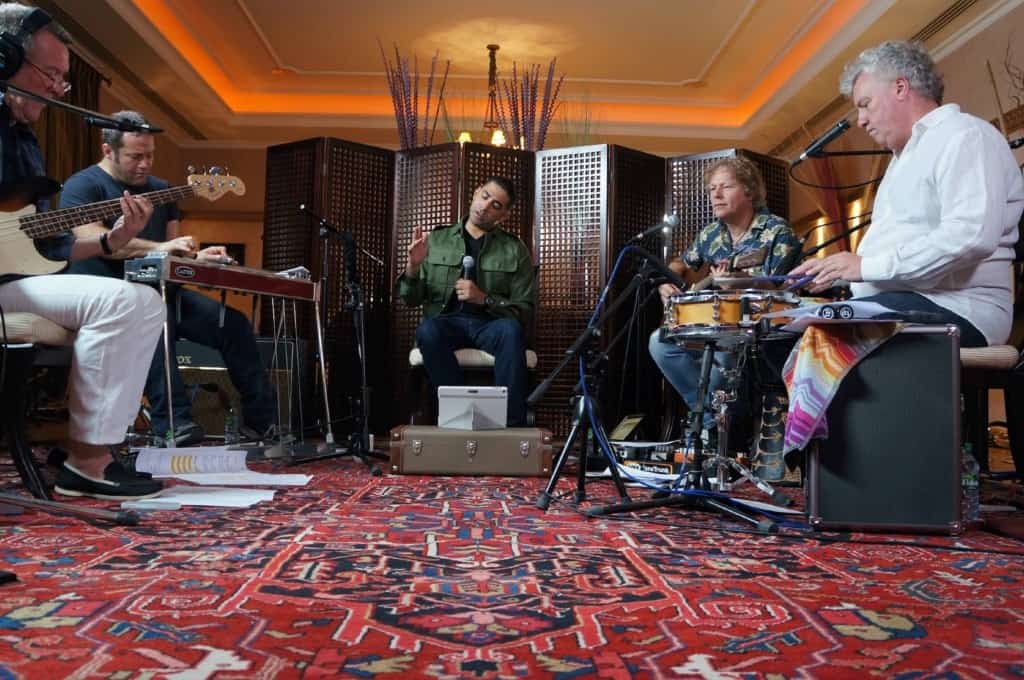 Take a look at any pop-stars live performance video and you’ll see on stage other musicians. You won’t necessarily know their name or their face but they look cool and certainly not out-of-place in their situation.

2 SeasSessions: Session Musicians: “Crikey, that Hassan can pick a band!”

Take a look at any pop-stars live performance video and you’ll see on stage other musicians. You won’t necessarily know their name or their face but they look cool and certainly not out-of-place in their situation. These people are known as session players faceless and nameless next to the stars, living the life, being there but at the same time, not the central object of desire, a lackie, a hired hand.

What does it mean to have played with and worked alongside all of these big names?

It means a successfully carved career, jumping from tour to tour or recording session to recording session. Travelling the world plying trade as a ‘gun for hire’ for pop-stars and rock-stars alike. It means living a life many people dream about.

Way back at 2 SeasSession #1 we had the pleasure not only of the dulcet soulful vocals of Bahraini singer Hassan bin Rashid but also his hand-picked band. A quick look down the list of famous names that these musicians have played with is like a roll call of rock’n’roll.

Here is a look at the careers of the members of the aforementioned Hassan Bin Rashid band:

Primarily known as pedal steel player Duffy has been a leading session player since the late 1990s with his signature playing being heard on records by artists as diverse as Chris Difford of Squeeze and pop star Robbie Williams on his multi-platinum ‘Sing when you’re winning’ album released in 2000. Whilst writing, recording and producing music he continues to be the Pedal Steel player of choice for many stars.

John Martyn and Daniel Beddingfield are not often mentioned in the same sentence but in the electrifying career of Danny Cummings, it really is no step at all. Fulfilling his vocation as drummer/percussionist with a diverse array of acts is what Cummings does. Performing with globally successful pop acts like Tina Turner and Pet Shop Boys
As well as infinitely cooler, if less financially successful, acts like Penguin Café Orchestra and David Sylvian.

When Brian May invites you to join Queen it’s a fair indication that you’re probably one of the top guitar players in the world. That quality of musicianship has been earned through years of playing at the very top of his game with a great variety of acts. From Elaine Page to Miss Dynamite and Lionel Richie to Roy Wood Moses’ guitar playing has seen him build a reputation as one of the worlds’ finest sidemen.

“Oh, Hi Paul, yes I’d love to come and join you on your world tour, swap between guitar and bass with you, of course!” is a conversation most musicians dream about having with Sir Paul McCartney. Hamish Stuart is a truly world-class musician and member of seminal Scottish funk/soul outfit Average White Band. His writing credits include songs for Smokey Robinson and Diana Ross. Oh, and it is Stuart that is responsible for all those mid-80s Chaka Khan funky bass-lines.

When listening through 2SeasSession #1 the quality of musicianship is tangible. Pure Music flows from the fingers of this fine collection of session players. Always high class and also with an empathy to the song and the singer. What else could you expect from these talented, experienced world-class players.

Why not check out 2Seas Session #1 and a few other videos of these guys: