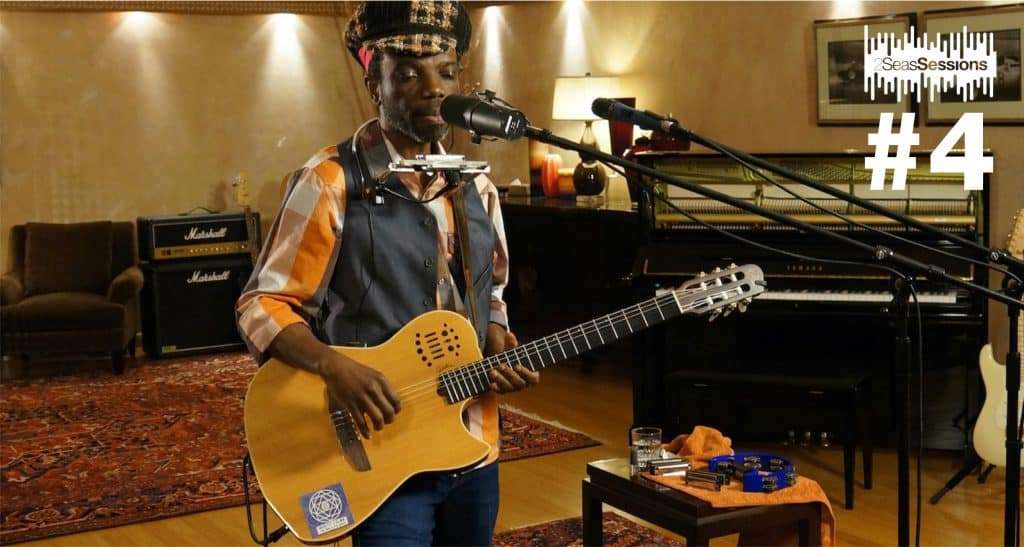 We are over the moon to have had Muntu Valdo join us in the studio for a 2 Seas Session.

We are over the moon to have had Muntu Valdo join us in the studio for a 2 Seas Session.

Muntu Valdo, is a Jazz guitarist, harmonica player and singer from Doula, Cameroon. He has performed on-stage with Ali Farka Toure, Manu Dibango, Richard Bona, Lokua Kanza, Eko Roosevelt, Lionel & Stephane Belmondo, Keziah Jones, and Alpha Blondy, and has played at Womad music festivals. Muntu Valdo describes himself as a “Sawa Boy”, hailing from the Sawa people who live in Cameroon’s coastal region. With a guitar in hand, a harmonica at his lips and at his feet a deck of pedals – dubbed his “sorcerers,” Valdo performs and records an array of musical parts that create his multi-layered grooves via a series of loops. Totally amazing musician.

Muntu Valdo belongs to the Sawa community who populate the length of Cameroon’s coastline along the Golf of Guinea. His father is from the small village of Dibombari, 30km west of Douala, his mother from the Malimba Islands out in the Atlantic Ocean, famous for their oysters.

Muntu then is a Sawa, a child of the coast, a child of the mangroves and of the water, a child whose birth was hailed and blessed by the « Miengu » (mermaids) who are known to protect or destruct people and populations depending on their humour. Eighty kilometres east of Douala, the economic capital of Cameroon and its  densely populated city, is the town of Edea. It’s here, inside his grandmother’s small house perched on the banks of Cameroon’s longest river, The Sanaga that Muntu was born.

As a young boy his nickname was Muutu (from “Muut’esucudu” which translates as “good student”), because of the exceptional ease with which he could memorise and recite stories and legends. With time Muutu will become Muntu.