Marc Bolan – The Greatest Little Giant in the World

Marc Bolan – T-REX: The Greatest Little Giant in the World

About Bolan’s death, Bowie said, “I’m terribly broken by it. He was my mate. The only tribute I can give Marc is that he was the greatest little giant in the world.”

A giant in the early 70s Glam Rock period Bolan was British to the core, a Dandy, a Poet and moreover The King of Glam. Massive hits with massive rock chords are what he is known for in songs like 20th-century boy and many others but there was a much deeper gentle side to a lot of his music. Lean Woman Blues, in particular, is a big favorite for me.

This story is from the November 3rd, 1977 issue of Rolling Stone. 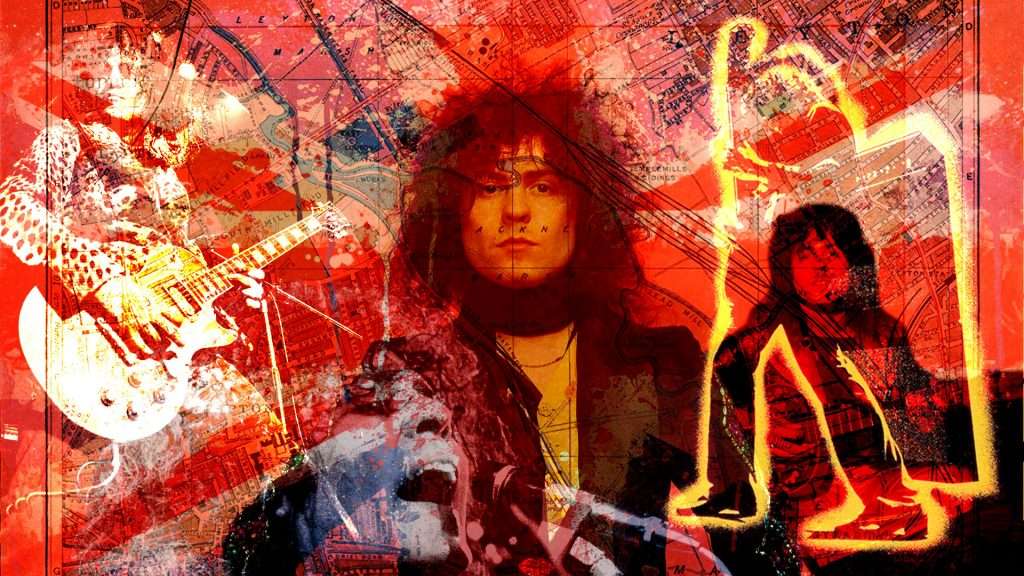 Marc Bolan was a singer/songwriter/guitarist who, after a couple of false starts as a solo artist, enjoyed much more fame with his subsequent projects, John’s Children, Tyrannosaurus Rex and especially T. Rex.

Marc Feld was born in Hackney, London on September 30th, 1947 to Simeon and Phyllis Feld, a Jewish couple who lived at 25 Stoke Newington Common. Phyllis worked at a fruit stand in Soho and Simeon worked odd jobs, including as a make-up salesman and truck driver. Early on young Marc developed a taste for music. One of his first discoveries was Bill Hayes’s song “The Ballad of Davey Crockett.” His father, in an effort to procure the record for his son, got Hayes confused with another American Bill, Bill Haley. As a result of the error, the world of rock ‘n’ roll was opened up and, at eight-years-old, Marc was enjoying the likes of rock ‘n’ rollers like Arthur Crudup, Chuck Berry, Eddie Cochran and Gene Vincent. He even built himself a rudimentary guitar before his parents indulged him with a drum set and, at nine, his first proper guitar. A few years later he was hanging around London’s coffee bars, where UK rock ‘n’ roll and skiffle was also brewing. He formed his own skiffle band at twelve, Susie and the Hula Hoops, for whom he played a tea-chest bass, supporting vocalist Helen Shapiro.

His next affiliation was with the Stamford Hill Mods. He became friends with fellow natty clotheshorses Keith Reid, Steven Georgiou (later Cat Stevens) and David Jones (later David Bowie). Shortly after his family relocated to a prefab in Wimbledon, Angus McGill (a writer for the Evening Standard) wrote the first press article about the then still mostly-Jewish Mod scene for Town Magazine entitled “Faces without Shadows” which included Peter Barnsley’s photos of the fifteen-year-old Feld. Although still a fan or rock ‘n’ roll, he used the opportunity to slag the Mods’ rival Teddy Boys, stating that they “just like a contest for the worst haircut.” The exposure brought him the attention of a modeling agency and Feld, as a result, briefly became a “John Temple Boy,” where he modeled suits for the company.

At seventeen, he again shifted gears, this time donning a denim cap and playing acoustic guitar in the fashion of Bob Dylan and Donovan. As an aspiring folk singer, he rechristened himself Toby Tyler. After meeting Allan Warren, the actor became his manager and set up a photography session with Michael McGrath.  In 1964, with Joe Meek, Toby Tyler recorded Dylan’s “Blowin’ in the Wind,” Clint Ballard’s “You’re No Good” and Dion’s “The Road I’m On (Gloria)” with Big Jim Sullivan (guitar), Nicky Hopkins (piano) and Clem Cattini (drums). The results were submitted to EMI where they were summarily rejected. In September 1992, they re-surfaced and, given his now larger stature, sold for £4,200. In another bid for stardom, Feld began routinely hanging around the National Theatre in hopes of being discovered. In this endeavor he was somewhat successful as he was cast as a delinquent on Sam Kydd and got a bit part on Orlando, stretch his acting chops by playing a Mod.

Despite these small successes, fame wasn’t exactly forthcoming so Feld took an extended trip to France in 1965. Although he claimed to have stayed with a wizard in a forty room chateau learning the black arts, practicing magic and participating in gruesome religious rites (in the company of an owl named Achimedies), in all likelihood he was hanging out with American actor Riggs O’Hara, smoking weed and reading Tolkien. When he returned to England, he had recast himself as a mystical hippie in crushed velvet who called himself Marc Bolan. He spent the months following his return churning out poetry and songs. The results were his first Marc Bolan single, the stomping, soul-influenced psych-pop “The Wizard”  b/w “Beyong the Rising Sun” that November on Decca. Though he appeared on Ready, Steady, Go, the signal went dead for most of the performance and his performance was generally viewed as poor. In June 1966, he released his follow-up, “The Third Degree” b/w “San Francisco Poet.” After its complete commercial failure, the planned follow-up, “Jasper C. Debussy” b/w “Lilac Hand of Menthol Dan” was shelved and Bolan’s contract with Decca expired.

In October 1966, under the guidance of the notorious Simon Napier-Bell, Bolan recorded a fifty-minute session at Kingsway Studios. Afterward, the pair shopped around one of the songs, “Hippy Gumbo,” but most record companies proved uninterested. With a little coercion from Napier-Bell, Columbia released it as a single in June, 1967, with “Misfit” as the B-Side. It was another flop with both the public and critics, one of whom called it “a crazed mixture of an incredibly bad negro blues singer and Larry the Lamb.” Undaunted, Bolan made another appearance on Ready, Steady, Go where he was somewhat overshadowed by a visiting American musician, Jimi Hendrix.

Napier-Bell next plugged Bolan into his shock/Mod/psychedelic/pop art band, John’s Children, for whom Bolan contributed their best songs. He left them the same year and soon after formed Tyrannosaurus Rex, an lysergic hippie folk duo with Steve Peregrine Took.  After their dissolution, on March 1970, Bolan’s guitar-playing was featured on David Bowie’s single, “The Prettiest Star,” where his embryonic glam rock touch spruced up the Dame’s follow-up to his folk-psych “Space Oddity.” That August, Bolan formed a new band, Dib Cochran & the Earwigs, with Tony Visconti on bass, Rick Wakeman on piano, and John Cambridge on drums. Their flatmate and Bowie’s new guitarist, Mick Ronson, came to watch them record. Their Tony Visconti-produced single, “Oh Baby” b/w “Universal Love,” was released on Bell Records but was another flop. Afterward Bolan formed another band , this one called T. Rex. Their debut single, “Ride a White Swan,” was released in October and peaked at number two in the charts. The rest is well-known and oft-told history.

Marc Bolan, best-known as the frizzy-haired leader of T. Rex, died September 16th in a car crash. Police said Bolan, 29, was killed when a car driven by his girlfriend, singer Gloria Jones, struck a tree in southwest London. Jones was hospitalized for injuries.

Bolan, who was enormously popular in Britain during the early Seventies, had recently been the subject of English press reports that said he had recovered from alcoholism and drug addiction brought on by the pressures of being a teen idol. “I was living in a twilight world of drugs, booze and kinky sex,” Bolan said in one newspaper interview.

Bolan began his rock & roll career in 1966 as a member of John’s Children, a group that had two minor British hits. In 1968, he formed Tyrannosaurus Rex, an acoustic duo with Bolan on guitar and Steve Took on percussion. In 1970, Micky Finn replaced Took, the group shortened its name to T. Rex and began moving toward more of a hard-rock sound. Later in ’70, “Ride a White Swan” went to Number Two on the British charts, and Bolan became a superstar overnight.

Although T. Rex produced eleven British Top-Ten singles and generated fan hysteria reminiscent of the days of the Beatles, the group never achieved equal popularity in the U.S. Only one single, 1971’s “Bang a Gong (Get It On),” was a U.S. hit.

In 1973, Ringo Starr documented T. Rex’ success in the movie Born to Boogie.

T. Rex’ popularity began to fall off in the mid-Seventies, but Bolan had recently made a comeback of sorts – he had just filmed the first two shows for a new British TV series. In addition, Bolan had plans for a TV show with friend David Bowie.

Bowie, Rod Stewart and Steve Harley were among the musicians who attended Bolan’s funeral September 20th at Golders Green Crematorium.

This story is from the November 3rd, 1977 issue of Rolling Stone.