All The Gear – Part One: The equipment that made Rock ‘n’ Roll 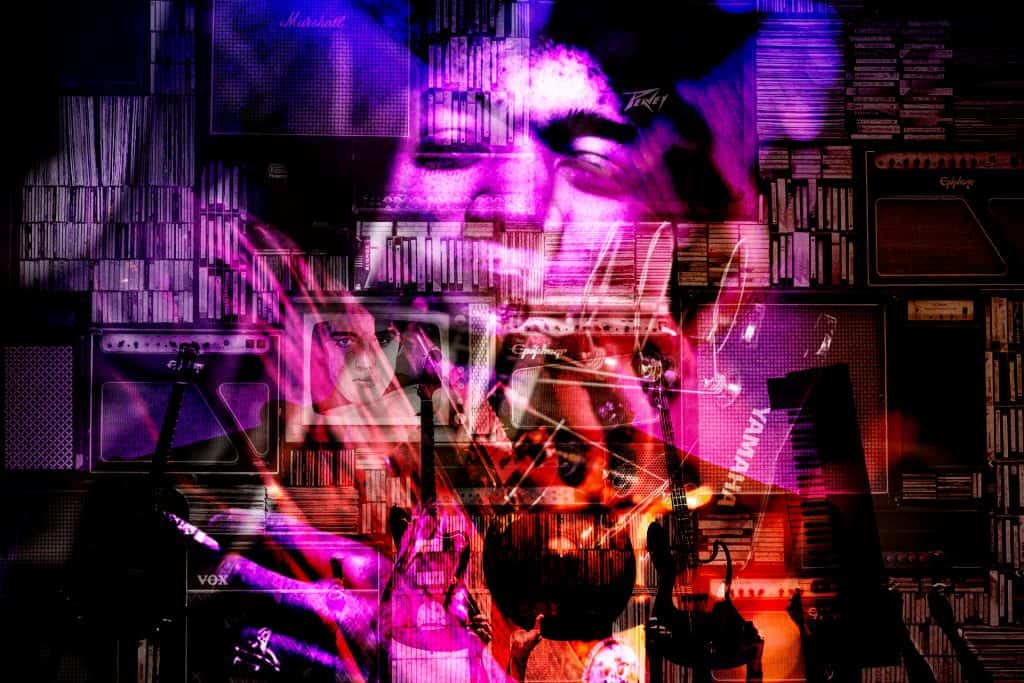 All the gear: The equipment that made Rock ‘n’ Roll

Take a look at a photo of the Rolling Stones, the Ramones, The Bob Marley and the Wailers in performance or Oasis, Arctic Monkeys and the Foo Fighters or any big name act and on stage from the 1960s to the modern day and you’ll see a remarkable similarity in the equipment that fills that stage.

Behind the suave strutting confidence, just out of the limelight, these instruments, amplifiers, speaker cabinets and all kinds of ‘tricks and whistles’ are as much a part of Rock ‘n’ Roll as Doc Martens boots and ripped jeans and Jack Daniels. They are the sound of Rock ‘n’ Roll. Loaded in and out of trucks and venues by Lemmys’ famed ‘Road Crew’ these machines arrive on casters in industrial looking flight-cases and dominate the stage, appearing as mountains in a darkened landscape, noise is their business and business is good.

Most of this wonderful noise derives from just a handful of people. These people had little idea at the time of the global effect their innovations would have. Here’s a look at a few of those people and their legacies.

Dick Denney was a keen guitar player and electrical engineer. He began working for Jennings Musical Industries a company based in Dartford in the English county of Kent named in 1957. As an electric guitar player, Denney was acutely aware of what guitar players wanted from an amplifier and so designed and built the simply gorgeous Vox AC15. However by 1959 players wanted more volume, more ‘loud’, more noise so Mr. Denney doubled up and created the iconic Vox AC30. The Beatles, Queen and U2 all have that signature AC30 sound, much copied, but never bettered.

In the early 1960s, Jim Marshall owned a music shop in West London from which he taught drums, one notable pupil being Mitch Mitchell later of The Jimi Hendrix Experience. A number of his guitar playing customers, including the then very young Pete Townshend and Ritchie Blackmore, complained that they couldn’t get loud enough with there ‘small’ 30watt amplifiers and wanted more depth to the sound. Mr.Marshall saw this as an opportunity and provided them with the daunting 6 foot 2 inch, 100-watt rock-monster that is the ‘Marshall Stack’. From that point onwards Jim Marshall was known affectionately as ‘The father of loud’. If you ever have the chance to stand a couple of yards in front of a full Marshall stack and hear a power- chord rung through its screaming hot valves, do it. It is like nothing on earth, literally knee-trembling, the clothes quivering around your body.

Les Paul was a US Jazz guitar player of repute, playing sessions and appearing on big hits of the day. He was also a guitar builder, recording innovator and inventor. In 1952 the Gibson guitar company first offered for sale the ‘Les Paul’ an innovative solid body electric guitar. Initially, it wasn’t greatly received by the guitar buying public but over time the high output and huge sustain caught the imagination of rock and blues guitar players. The Les Paul guitar IS the sound of Led Zeppelin, Santana and Gary Moore.

Over any of the people listed unassuming Californian Leo Fender is responsible for greater innovation and has had a stronger influence over the sound of Rock ‘n’ Roll. In 1950 the Fender Electric Instrument Manufacturing Company introduced the ‘Telecaster’ the first mass-produced, component part Electric guitar. It was followed in1954 by the legendary ‘Stratocaster’. However, it is with the 1951 introduction of the ‘Precision Bass Guitar’ or ‘P-bass’ that Leo Fender really pushed the boundary. He not only made a reliable and accurate instrument but also completely changed the course of music. Now the bass could be heard clearly amongst drums, pianos and guitars without feedback. Within a few years, the Double bass had been more or less forgotten in Rock ‘n’ Roll music and replaced by its solid-body cousin.

The company simply termed ‘Fender’ are also responsible for a couple of legendary amplifiers. The Fender Bassman, originally designed as the name suggests for bass guitar, had greater success as an amplifier for guitar players. Early rock ‘n’ roll heroes like Eddie Cochran and Buddy Holly thrived on the sound these beasts throw out. According to myth the big, crispy and unrelentingly loud Bassman was used as a model for both Vox and Marshall amplifiers, but no-one can be quite sure.
Then there is the ever dependable workhorse that is the Fender Twin, with it’s 60 or 100-watt output through glowing valves and twin 12-inch speakers it is a standard by which all other guitar amps are judged. He was a clever fellow that Leo Fender.

Ampeg SVT: Keeping the bass in its place

In 1969 Bill Hughes of the Ampeg company introduced the fabulously loud 300-watt Ampeg SVT bass guitar amplifier. Its ‘Super valve Technology’ insured a big warm tone, superior to anything available at the time. On the U2 ‘Zoo’ world tour in 1993 several Ampeg SVTs were employed under the stage to add more boom, during the Buenos Aires show near seismic levels of activity were registered on the Richter scale from 50 miles away. Now, that is the power of rock ‘n’ roll.

In the next instalment, we’ll cover Drums and Keyboards and have a look at some legendary vocal microphones at the centre of every Rock ‘n’ Roll stage.

Instruments and Guitar players in this article:

Motorhead: ‘We are the Road Crew’:

Dick Denney and the story of the AC30:

A History of The Ampeg Bass Amp Company:

PrevPreviousThe Guitar: A potted history of the worlds’ most accessible instrument
NextAll The Gear – Part Two: The equipment that made Rock ‘n’ RollNext