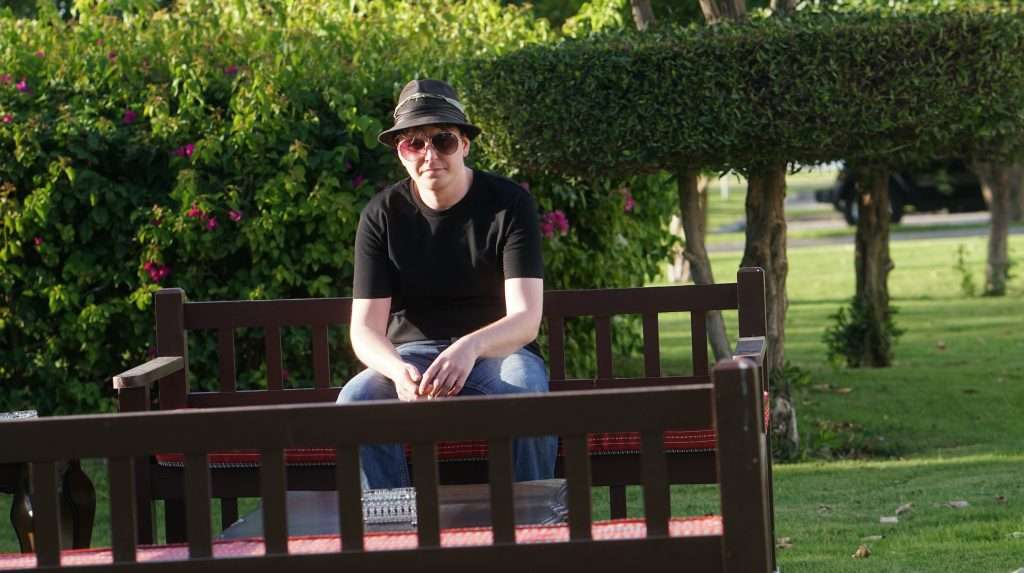 Dan is FATTTB, a one-man blues funk machine with a British style of punk attitude and social commentary.

Delighted to have Dan of Funke and the Two Tone Baby over for a 2Seas Session.

Funke and the Two Tone Baby is a one man sonic explosion. Uncategorised and uncharted. Jammed halfway between frenzied alt-blues and metronomic dance beats. Combining guitar and harmonica with beatboxing and effects that seamlessly collide the organic with the mechanical to create a fresh sound of unstoppable rhythm and unrelenting melody.

With a few effect pedals, we are ready to go. Cameras ready and Adrian in the mixing room we are off. Scott’s sound is totally mesmerising, sweeping trippy tones that just keep on building with super fast on-point guitar playing, the hairs on my arms are standing on end from the get-go. With a look over to my camera partner in crime, we both know we are filming something very special. Scott then steps it up a gear by hitting the body of his guitar and using an electronic kick drum, Minds now blown. So we have hippy trip atmospheric sounds that morph into beautiful stylish guitar playing with an electronic dance music heartbeat: Good Times!

Dan is FATTTB, a one-man blues funk machine with a British style of punk attitude and social commentary. So what we have is an amazing blend of beats, guitars, and layers of bass and top lines and o yeah and I nearly forgot….. 10,000% of energy.

Dan rocks up at the airport, after a 7-hour flight (London – Bahrain) looking fresh as a daisy, we grab him and his long flight case of tricks and head over to the apartment we have rented for him, it is now about 22.30. We settled him in a little toothbrush and freshen up and we are out to eat. Dan is keen to soak up a little of the culture and food. Grilled chicken and lamb on Mandi rice (Spiced rice) and few dips are eaten while seated on the floor, common for us not so much for Dan. A full belly and a happy Funke Dan and we move to a Shisha place (Hooka to many of you), Double Apple Shisha is ordered, a firm favourite flavour in these parts and we chill and smoke until Dan becomes a little Two Tone. That is it for the night, lets sleep we have a session to do in the morning.

Bright and early we are up and ready to roll. Gear loaded in the car and we are off to the studio. Dan is immediately blown away with the studio set up (as most people are) and after a few hellos to the team and a coffee, we get down to business.
Dan sets up his box of tricks as we get a few angles sorted for our cameras. I can tell straight away that this is going to be a great day. Set up and ready we go for it. Dan bangs out six amazing tracks back to back without a hitch, the boy is a Pro.

I did mention early his energy on stage and boy has he go some. Foot pedals going like the clappers, he is almost tap dancing at points and on top of this, he is simultaneously playing keyboards, harmonica, and singing. Bloody hell I got tired just watching him. Totally amazing stuff, the whole team are blown away by his performance. Time for a cup of tea me thinks and take in what we have just witnessed.

We do a few photos and sit down interview and then off to the control to have a little listen.

The session is over and it is time for Dan to head home. Not only have we captured a great set from Dan but we also have a new friend. Dan is a truly talented Gentleman and welcome back to see us anytime.

★ Funke And The Two Tone Baby: Dance Until You Drop - 2SeasSession #14 - Bahrain