British from Head to Toe – Ian Dury and The Blockheads

If there was ever a sound of being British within music you may well think The Who, Led Zeppelin, The Kinks or perhaps The Beatles, but you should take a look at Mr Ian Dury.

Ian Dury was a rock and roll vagabond with the wit and intelligence of Noël Coward and Oscar Wilde.

The now legendary single Sex and Drugs and Rock and Roll / Razzle in My Pocket marked his Stiff debut and this was swiftly followed by the album New Boots and Panties!! that eventually achieved platinum status. In October 1977, Ian signed up for the Stiff Live Stiffs Tour, alongside Elvis Costello and the Attractions, Nick Lowe, Wreckless Eric and Larry Wallis. Ian’s new band, now augmented by guitarist Johnny Turnbull and keyboard player Mickey Gallagher, was christened Ian Dury and the Blockheads and the group became the surprise hit of the tour. To capitalise on this, Stiff Records launched a concerted Ian Dury marketing campaign, resulting, in the Spring of 1978, in the Top Ten hit What a Waste. New Boots and Panties!! continued to sell in greater quantities and in November that year, Ian released the irrepressible Hit Me with Your Rhythm Stick, which became a UK Number One hit in January 1979.

Dury was now a bona fide pop star and, with the Blockheads, toured to great acclaim. Another Top Ten single, Reasons to Be Cheerful (Part Three), kept Dury in the public eye during this arduous period of recording. The album was eventually released in June 1979 in a Barney Bubbles-designed sleeve of which there were over thirty variations, all based on samples from the Crown wallpaper catalogue. In 1980 Chaz Jankel departed the Blockheads to concentrate on a solo career, signing with A&M Records. Chaz was replaced by former Dr Feelgood guitarist Wilko Johnson, who further enlivened the group’s stage act and contributed to the next album, Laughter, and its two minor hit singles – I Want to Be Straight and Sueperman’s Big Sister.

Sex and Drugs and Rock and Roll.

Hit Me with Your Rhythm Stick.

Reasons to Be Cheerful (Part Three). 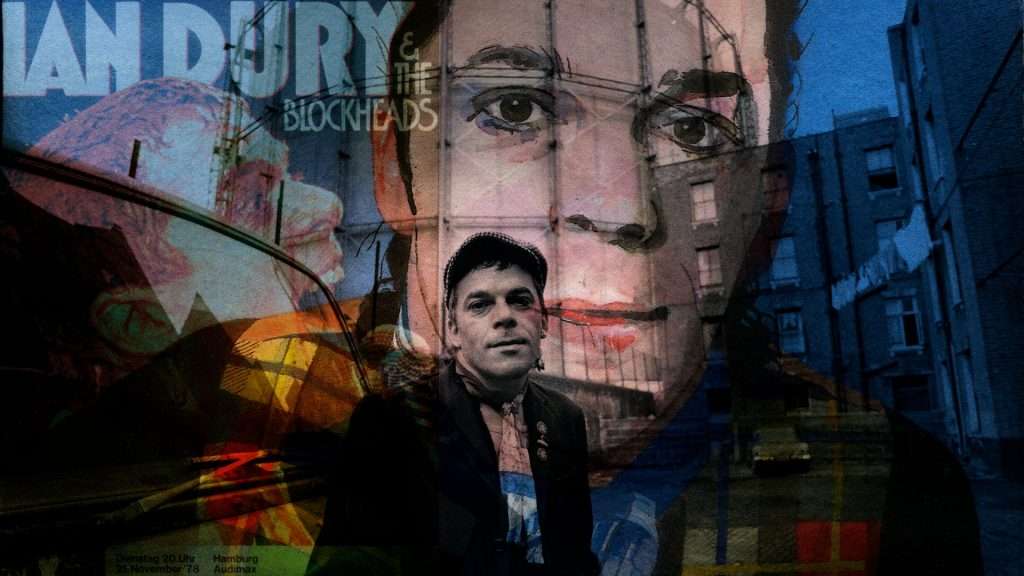 Ian Robins Dury (12 May 1942 – 27 March 2000) was an English singer-songwriter and actor who rose to fame during the late 1970s, during the punk and new wave era of rock music. He was the lead singer of Ian Dury and the Blockheads and before that of Kilburn and the High Roads. Dury was born at his parents’ home at 43 Weald Rise, Harrow Weald, Middlesex (though he often pretended that he had been born in Upminster, Essex, which all but one of his obituaries in the UK national press stated as fact). His father, William George Dury (born 23 September 1905, Southborough, Kent; died 25 February 1968), was a bus driver and former boxer, while his mother Margaret (known as “Peggy”, born Margaret Cuthbertson Walker, 17 April 1910, Rochdale, Lancashire; d. January 1995) was a health visitor, the daughter of a Cornish doctor and the granddaughter of an Irish landowner. At the age of seven, he contracted polio, most likely, he believed, from a swimming pool at Southend on Sea during the 1949 polio epidemic. After six weeks in a full plaster cast in the Royal Cornwall Infirmary, Truro, he was moved to Black Notley Hospital, Braintree, Essex, where he spent a year and a half before going to Chailey Heritage Craft School, East Sussex, in 1951.

In 1980–81 Dury and Jankel teamed up again with Sly and Robbie and the Compass Point All Stars to record Lord Upminster (1981). The Blockheads toured the UK and Europe throughout 1981, sometimes augmented by jazz trumpeter Don Cherry, ending the year with their only tour of Australia. The Blockheads disbanded in early 1982 after Dury secured a new recording deal with Polydor Records through A&R man Frank Neilson. Choosing to work with a group of young musicians which he named the Music Students, he recorded the album Four Thousand Weeks’ Holiday. This album marked a departure from his usual style and was not as well received by fans for its American jazz influence.

The Blockheads briefly reformed in June 1987 to play a short tour of Japan, and then disbanded again. In September 1990, following the death from cancer of drummer Charley Charles, they reunited for two benefit concerts in aid of Charles’ family, held at The Forum, Camden Town, with Steven Monti on drums. In December 1990, augmented by Merlin Rhys-Jones on guitar and Will Parnell on percussion, they recorded the live album Warts & Audience at the Brixton Academy.

The Blockheads (minus Jankel, who returned to California) toured Spain in January 1991, then disbanded again until August 1992 when, following Jankel’s return to England, they were invited to reform for the Madstock! Festival in Finsbury Park; this was followed by sporadic gigs in Europe, Ireland, the UK and Japan through late 1994 and 1995. In the early 1990s, Dury appeared with English band Curve on the benefit compilation album Peace Together. Dury and Curve singer Toni Halliday shared vocals on a cover of the Blockheads’ track “What a Waste”.

In March 1996 Dury was diagnosed with cancer and, after recovering from an operation, he set about writing another album. In early 1998 he reunited with the Blockheads to record the album Mr Love-Pants. In May, Ian Dury & the Blockheads hit the road again, with Dylan Howe replacing Steven Monti on drums. Davey Payne left the group permanently in August and was replaced by Gilad Atzmon; this line-up gigged throughout 1999, culminating in their last performance with Ian Dury on 6 February 2000 at the London Palladium. Dury died six weeks later on 27 March 2000.

It was known for some time before his death that Dury had cancer. He was diagnosed with colorectal cancer in 1996 and underwent surgery, but tumours were later found in his liver, and he was told that his condition was terminal. Upon learning of his illness, Dury took the opportunity to marry his girlfriend, sculptor Sophy Tilson, with whom he had had two children, Bill and Albert.

In 1998, his death was incorrectly announced on XFM radio by Bob Geldof, possibly due to hoax information from a listener. In 1999, Dury collaborated with Madness on their first original album in fourteen years on the track “Drip Fed Fred”. Suggs and the band cite him as a great influence. It was to be one of his last recordings. He also performed again with the Blockheads in mid-1999 at Ronnie Scott’s in Soho. This was a special performance recorded for LWT’s South Bank Show and the audience were invited fans and friends of the band and crew. His deteriorating condition was evident and he had to take rests between takes and be helped on and off stage.

Ian Dury & the Blockheads’ last public performance was a charity concert in aid of Cancer BACUP on 6 February 2000 at the London Palladium, supported by Kirsty MacColl and Phill Jupitus. Dury was noticeably ill and again had to be helped on and off stage.

Dury died of metastatic colorectal cancer on 27 March 2000, aged 57. An obituary in The Guardian read: “one of few true originals of the English music scene”. Meanwhile, he was described by Suggs, the singer of Madness, as “possibly the finest lyricist we’ve seen.” The Ian Dury website opened an online book of condolence shortly after his death, which was signed by hundreds of fans. He was cremated following a humanist funeral at Golders Green Crematorium with 250 mourners at the service, including fellow musicians Suggs and Jools Holland as well as other “celebrity fans” such as MP Mo Mowlam.